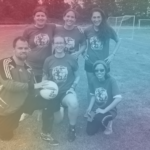 “Openness may not completely disarm prejudice, but it’s a good place to start.” – Jason Collins

Leonardo is a non-profit organisation for international Lesbian, Gay, Bisexual, Transgender and Non-binary people as well as other members of the LGBTQIA+ community and their allies. The group is located in the city of Leuven, in the Belgian province of Flemish-Brabant, and is a member of both Cavaria and Unique-Vlaams Brabants Regenbooghuis. Our activities are closely linked to KU Leuven and its student population. Together with UNDIVIDED for KU Leuven we are one of the founding organisations of the Pride Week initiative (known currently as the KU Leuven Pride Week).

Leonardo has been established in 2011 as the first English-speaking organisation for LGBT+ people in the province of Flemish-Brabant. Until today it remains the only organisation at Unique – Vlaams-Brabant Regenbooghuis fully run by internationals.

The organisation aims to create opportunities and safe space for international students and residents of the city, as well as raise awarness about the needs the LGBTQIA+ community has and problems it faces.

Our activities include social meet-ups as well as educational events, workshops, and awarness raising projects. Both events and meetings are open to everyone regardless their gender identity, sexual orientation or believes. The key principles are respect, tolerance and acceptance.